Take a massive chicken breast (these boobies are enormous) and coat it in Cheetos Crunchy®Flamin’ Hot® cheezies then douse it in spicy Buffalo ranch dressing and stack it high with dusted jalapeños tomato, lettuce, and more cheezies—then serve it on a Classic Gourmet Bun from ACE Bakery®. Now that’s a cluckin’ good chicken burger! Head over to Montana’s BBQ & Bar, and that’s what you’ll find for a limited time.

So why does a marketing agency in Hamilton care? Well, firstly, we’re not just about website design, SEO and marketing. Secondly, we love this burger. Thirdly, it was created right here in Hamilton by a McMaster student and football player, Blaise Barber.

We love local stories, and the Blazin’ Hot Cheetos Chicken Sandwich is a tasty scoop of news. So, we sat down with the creator to uncover just what inspired this fiery, glutinous mess of a masterpiece.

Blaise: “I was reading the contest guidelines, and Montana’s wanted something that social media would ‘eat-up’, something that would be buzz-worthy and popular. I love Cheetos, and it’s my go-to snack. So, I knew they were going to be part of my creation from the start—that was my first ingredient— then I thought, ‘what would complement the sandwich from there?’”

Creepy SI Interviewer: As a football player at Mac, you’re obviously big into sports. What characteristics do you think this sandwich has more of; the zesty finesse of an ultimate frisbee player or the fiery and bold attitude of a football player?

Creepy SI Interviewer: Have you heard a response from customers that try it? What’s that like, and do you think it will make the permanent cut on the menu? (update: it didn’t)

Blaise: I hope so. If it does well enough in sales. It’s great to be working there and hearing what customers have to say. They really enjoyed it. They say it’s different, and people get genuinely excited. I hear a lot about the “crunch”

Creepy SI Interviewer: This is very much a Manwich. Do you think it would give the Mac cheerleaders a pep in their step?

Creepy SI Interviewer: The size of the chicken breast is massive. Have your team members tried it? Did it fill their appetites?

Blaise: A couple of guys were scared of it. But yes, it’s a beast of a sandwich.

Creepy SI Interviewer: There’s no doubt the sandwich is spicy, jam-packed with fire. People online are saying “Volcano hot” and “timeout” was it your intent to smack people in the face like a hulking O-lineman?

Blaise: Oh yeah. Put it over the top. That’s why I added the sauce.

Creepy SI Interviewer: What do you think would be better, the new KFC Cheetos chicken sandwich (Cheetos sauce) or your creation?

Blaise: I’m not a big fast-food guy, but I’ve tried the KFC sandwich, and it was underwhelming. It wasn’t very spicy. My creation is better, 100%.

Creepy SI Interviewer: Ken Domik of KBDProductionsTV reviewed the sandwich and had some very positive words, “Out of all the flammin’ Cheetos things I’ve reviewed, this is the best. It’s phenomenal, people.” Another popular Canadian food reviewer, Jackie Heroux (@BlkjackU2), was also keen on it.

They really impressed with your sandwich. What would you say to them if they wanted you to make them a new sandwich? Do you have any new ideas?

Blaise: It’s an honor to hear that. I’d be interested—let’s do it, Ken. I like to be creative, and I’m a huge fan of cooking. I am an avid cooker for my housemates, making homemade burgers, BBQ, and whatnot.

Creepy SI Interviewer: You won the 2016 Ontario Junior Citizen Award. That’s an amazing accomplishment. How does winning this competition stack up?

Blaise: It’s pretty big to be recognized on a national level, and I’m very proud of working with kids. This is not quite on that level, LOL.

Creepy SI Interviewer: Your parents must be proud. Did they try the scrumptious snack (a colossal snack, at that)?

Blaise: Yes! My dad liked it a lot. He loves the Buffalo Wild Wings wild sauce, so it reminded him of that a lot. Mom was not as fond of it.

Blaise: I went shopping downtown Toronto and picked up some new clothes and a pair of shoes.

Well, Blaise, enjoy the new kicks. We’ll be enjoying another spicy kick in the face this afternoon! 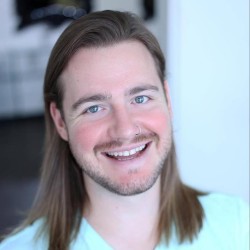 Vincent Bucciachio
If you're in the marketing space, you've likely heard of Vincent Bucciachio. He has revolutionized the industry as the founder and CEO of SociallyInfused Media, and if you work for another ad agency, you’re almost certainly weeping into your pillow at night—wishing that he was your boss. His long list of credentials are far too many to list here, and if he really wanted to, he could go on and on about his accomplishments for days. [Insert more pretentious crap about Vincent here].